In the age of smartphone and tablet devices it is becoming a rarity to see a commuter with a book or a pen & paper in their hands.  With the rise in tech use and more recently digital apps that help us talk, text, and learn many people have upgraded to the new wave of receiving information.

One fairly new rising community that spawned from the growth of  internet connectivity and digital content readership has been the debut of Webtoons users. Webtoons for those who don’t know are online published Korean webcomics or manhwa(*Korean word for comic books), first created by South Korea’s web portal service corporations Daum and NAVER, in the early 2000s. Gaining enormous popularity in readership over the last decade, led to the English translation of many published Korean webtoons, and the expansion of Daum and NAVER’s web portal services to webtoon creators internationally.

Used as a platform tool for writers, artists, and visual graphic creators, Webtoons provide  individuals with an online canvas space where they can self-publish their own work to the global community.  Similar, to online forums where content is shared, followed, and provides open forum discussions, Webtoons is an open community space focused on sharing stories ranging from real-based, fantasy, love, drama, action, etc. Webtoon stories represent the latest genre of digital novels. Having over 10 million readers Webtoons has become the largest online library for some.

While I lived in Korea I did not know too much about Webtoons until I learned about the popular 2012 webtoon called Misaeng(미생). Misaeng, was a well-known adult geared Korean webtoon that depicted the ‘incompete life’ of a young Korean male named Jang Geu-rae, who was trying to find his place in life, work, and society. The webtoon was created by Yoon Tae-ho, who wanted to accurately depict the present-day life struggles of Koreans  young, old, male, female, married, or single within Korean work culture.  In 2014, Misaeng was turned into a live-drama, and became a cultural phenomenon. The webtoon turned drama, set a new stage for webtoons and viewer audiences of all ages and backgrounds.

Due to Misaeng’s immense popularity subsequent Korean webtoons that garnered major popularity online eventually received the opportunity to appear in live-dramas. Another well-known webtoon that became another cultural representation of present-day Korea was the 2016 drama Cheese in the Trap(치즈인더트랩). Cheese in the Trap, is a long-time running serialized webtoon, created by Soonkki, and published on Webtoons from 2010-present. Similar but slightly different than the webtoon the live-drama follows the  female protagonist Hong Seol, as she navigates through life as a struggling college student and her relationship with her senior or sunbae(선배), Yoo Jung.

What primarily drives webtoon popularity is its ability to draw readers deeper into the  story. When compared to traditional books, webtoons possess visual images of characters, physical locations, and cultural aspects that promote deeper interests for subscribed readers. Thus it is no surprise that some webtoons that have received much attention & success on Webtoons, also received as much attention & success when turned into live-dramas or films. Due to growing popularity of webtoons, a recent summer 2016 drama called W(더블유), written by Song Jae-jung, became a MBC TV drama success due to the drama’s artists thrilling visual imagination for creating a realistic webtoon world inside of a live-cast K-drama. 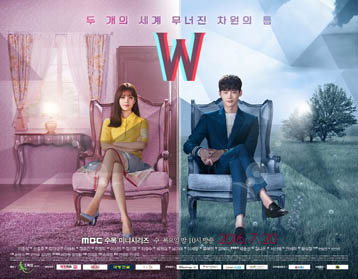 What I personally love about Webtoons is its promotion of artistic originality in the content that it publishes. I also love  the various genres available to webtoon readers ranging from real-based, fiction-based, love, fantasy drama, action, etc. Possessing a keen interest in real-based, fantasy, and love  I enjoyed  reading and watching: Misaeng and Cheese in the Trap; and watching W.

As Webtoons popularity grows I look forward to seeing what upcoming webtoons may turn into dramas,  Korean or international, and seeing what new webtoon content is created.

*Note: The majority of content pictures posted on this specific blog post are not entirely owned by the Yeppunshikan author, full credit is given to the respective trademark companies.